Center for Research and Documentation of Leonardo Studies
The Leonardiana Library

Access to the library is granted upon completion of an entrance form. Services: library orientation, reference, on-site consultation (loans possible only for reference works so indicated in the OPAC); bibliographic services available online, and via the local network, photocopying, digital and print reproductions, document delivery, viewing/scanning/printing of 16/35 mm. microfilm on tape reels (including the use of the patron's own reels), document scanning, Internet access.
The International Bibliography of Leonardo Studies is available at: http://www.bibliotecaleonardiana.it/catalogo

The birth of the Library is closely tied to the figure of Gustavo Uzielli, one of the most prominent Leonardo scholars of the second half of the 19th century. His efforts, as well as those of the administration of the city of Vinci resulted in creation of the Vinciana library in 1928 located in the birthplace of Leonardo. The acquisition of the private library of Gustavo Uzielli in 1911 by the town of Vinci preceeded the library's inauguration.
Rapidly becoming one of the most important centers for Leonardo studies in Italy, the library began developing a rich collection of studies published by or about this artist, with particular concentration on material appearing from the first decades of the 20th century to today. With the printed catalog Bibliotheca Leonardiana, 1493-1989 authored by Mauro Guerrini which detailed the Leonardo collections of the Vinci Library, the Ente Raccolta Vinciana in Milan, and the Carlo Viganò Collection held by the Università Cattolica del Sacro Cuore at Brescia, the Vinci Institute became the promoter of the publication of a vast specialized bibliography, bringing together the resources of the most important Italian collections dedicated to Leonardo da Vinci.
In the 1990's the Biblioteca Leonardiana has continued to evolve as a center not only for documentation but also as a resource for bibliographic information relating to Leonardo studies. It has created and maintained its online archive, a fundamental instrument which is comprised of the library's patrimony, the BIL: the Bibliografia Internazionale Leonardiana, which systematically updates the bibliographic repertory of works by and about Leonardo da Vinci, and includes thematic bibliographies some of which are dedicated to scholars of Leonardo studies.
Beginning in 2005, in collaboration with other scholarly institutions, the Leonardiana has created and developed e-Leo: archivio digitale di storia della tecnica e della scienza, a digital archive, continuously updated, which, by means of emerging technologies, offers a sophisticated instrument for scholarly research on the works of Leonardo da Vinci and in the near future other artists of the Renaissance.
The Library currently holds more that 15,000 printed works, of which approximately 11,000 are on or about Leonardo da Vinci. These include: facsimile reproductions of manuscripts and drawings, numerous editions of all printed works of Leonardo commencing with the first edition (1651) of the Trattato della pittura; monographs and contributions of various types from diverse disciplinary areas related to Leonardo studies.
Enriching the Library's patrimony are: a section devoted to reference resources on the works of Leonardo and studies on the 14th and 15th centuries; specialized periodicals, both those strictly devoted to Leonardo studies and those of a more general nature ranging from art history to science and technique; a number of book, document, and correspondence collections; graphic materials of various types; a notable digital collection of more than 35,000 clippings dating from 1938-1999 drawn from Italian journals devoted to any and all aspects of the life and work of Leonardo. 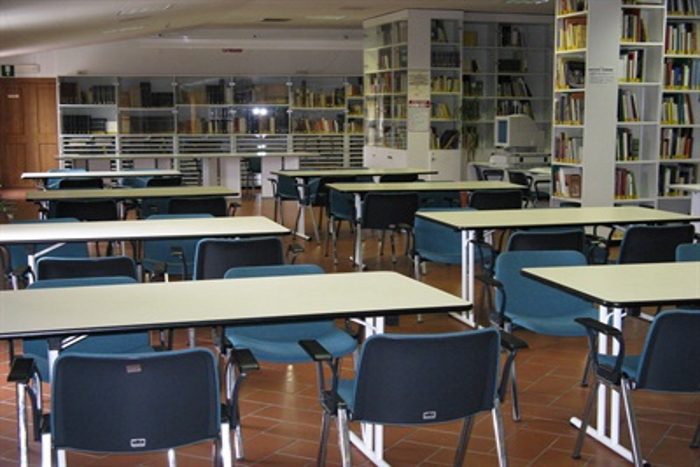